Our History and Establishment

Established in 1824, Butler McIntyre & Butler is the oldest law firm in Tasmania continuing to operate and perhaps the oldest in Australia.

Our firm evolved alongside the Island’s history. Although sighted by the Dutch navigator Abel Tasman in 1642, Van Diemen’s Land, as Tasmania was then known, was not settled until 1802 when the British sent a small landing party from Sydney to claim the island and pre-empt a rumored French settlement.

A year later in 1803, the first town was established by the British at Sullivan’s Cove (Hobart’s wharf area) and twenty years later, in 1822, Britain began her infamous, thirty-year history of transporting convicts to the Island — ground ripe for a law firm to establish!

On 3 September 1824, Gamaliel commenced legal practice in Hobart and so began the strong and long standing presence of Butler McIntyre & Butler in Tasmania. 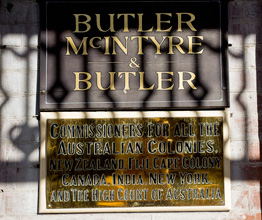 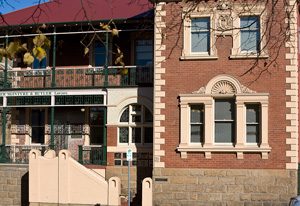 The firm, Butler McIntyre & Butler, is synonymous with Hobart and its building, is a well regarded landmark, on the corner of Murray and Davey Street.

In the early 19th century, Hobart grew to become a major port. The building that Butler McIntyre & Butler now occupies at 20 Murray Street, was then an Inn known as “The Waterloo”.

Ownership of “The Waterloo” and its licence passed through several hands; from the original owner John James, a prominent Hobart Brewer, through to the founder of Hobart’s Mercury Newspaper, John Davies.

In the 1860’s the building was refurbished, and converted to a boarding house establishment. The building become known as “Waterloo House”.

The property was sold in 1868 and then again in 1907, when the new owner, George Adams, decided to rebuild it. The two storey, convict built, stone brick building was replaced by a three storey, brick and stone dwelling. In keeping with the style, and no doubt to take advantage of the views, the verandahs surrounding the building were retained.

The main entrance was positioned in Murray Street, exactly as it had been in the old building. A stained glass window near the front entrance was also installed around this time and remains today. It is still possible to see many of the features which link the buildings to its historic past. There is an old cellar, which the staff jokingly refer to as “the dungeon”. The workings of an old dumb waiter were removed to enlarge the internal rooms, but parts of the structure remain.

Today, Butler McIntyre & Butler occupies both 20 and 22 Murray Street. The historic buildings accommodate over 50 staff, striving to achieve the best for its modern day clients. 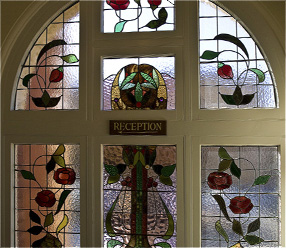 It is still possible to see many of the features which link the buildings to its historic past. There is an old cellar, which the staff jokingly refer to as “the dungeon”. The workings of an old dumbwaiter were removed to enlarge the internal rooms, but parts of the structure still remain.

Our part in the early history of Australia and Tasmania has seen Butler McIntyre & Butler form associations with other legal advocates in all States of Australia, and has given us a broad client base including numerous interstate and international clients.